(Did you read Chapter 1, Post 1: Adoption Day? If not, we recommend starting there.)

As January turned into February, Flapjax got more and more excited. He woke up every single morning, jumping up and down on a very sleepy Libby until she gave in and told him how many days were left until the 14th. She even pinned a calendar to her wall and circled Flapjax’s Adoption Day in a thick red marker so that he could cross each day off and watch as they got closer and closer to the big day.

Flapjax’s brows wrinkled with worry. He peeked over Libby’s shoulders as she coughed, and when she grabbed him to cuddle, he squirmed to get out of her arms. Her nose was all runny, and a runny nose had to be kept far away from fur – Flapjax knew from experience that fur was a rather tempting tissue substitute.

He scrambled over Libby and hopped out of bed as his best friend let out a hacking cough behind him. Flapjax gave Libby a quick look back as he ran from the room and shimmied down the long set of stairs to find his human parents.

The grownups were reading the newspaper in the breakfast room and drinking steaming hot coffee. Gross.

But Flapjax ignored all of that. Instead, he ran up onto Dad’s lap, causing him to spill his hot coffee all over his fancy work suit. Dad shouted and quickly jumped up to get the hot liquid off of him, causing Flapjax to belly-flop to the floor in a puddle of warm coffee. Splat! Flapjax shook off his fur then scampered quickly over to Mom, avoiding Dad’s large, angry, stomping feet. Flapjax tugged at her robe until she bent down to pick him up.

“Flapjax! What are you doing down there?” she asked, looking curiously at Flapjax and wiping off a few drops of coffee that had landed on his nose. Flapjax wished desperately that he could speak to humans. He sighed, frustrated, and tried to tell her telepathically that she needed to go upstairs to help Libby.

But instead of going upstairs, she simply plopped Flapjax on the bottom step and walked back into the kitchen, grabbing paper towels to clean up the spill.

Flapjax stared after her. He was mad and worried and for the first time ever wished he was human instead of stuffed. No one took a stuffed bear seriously.

How could he help his best friend if no one would listen to him? 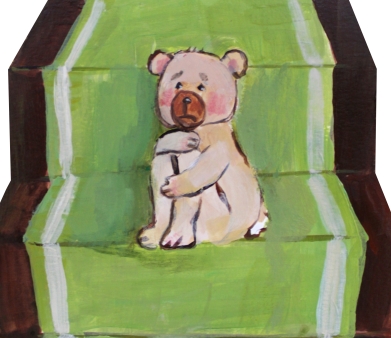 Flapjax sat on the step and thought. He sat long and thought hard until he came up with a new Adoption Day plan. A rescue plan.

First, he needed supplies. Real tissues, juice, medicine…he knew where to find it all, but getting it was going to be the real problem. After all, he was a very small bear.

He knew where the grownups kept the medicine – it was in a cabinet way up high. He wasn’t supposed to touch the medicine, and he knew he would never be able to open the bottle – paws are no match for those tricky lids – but if he could just get the bottle out, Mom would know what to do.

Flapjax ran back to the kitchen and pulled himself up onto the first shelf of the pantry. He had scaled his way up and across the boxes of cereal and cans of soup. He just had to make one big leap to land on the counter below the medicine cabinet, and he was home free.

He eyed his landing zone and took a deep breath as he held tight to the knob on the pantry door. One…two…and then without warning, the stack of soup cans holding him up began to shift and wobble. It happened quickly – Flapjax was flying through the air before he had time to think, hanging onto the doorknob for dear life. All of a sudden, the door banged into the cabinet, and Flapjax lost his grip on the knob. He sailed through the air, screaming and flapping his arms unhelpfully, before landing on the counter with a plop.

He looked around sheepishly. Phew, no one had seen (or heard) him.

Flapjax rubbed his bruised behind and shook off his misfortune. He had to focus on the task at hand! 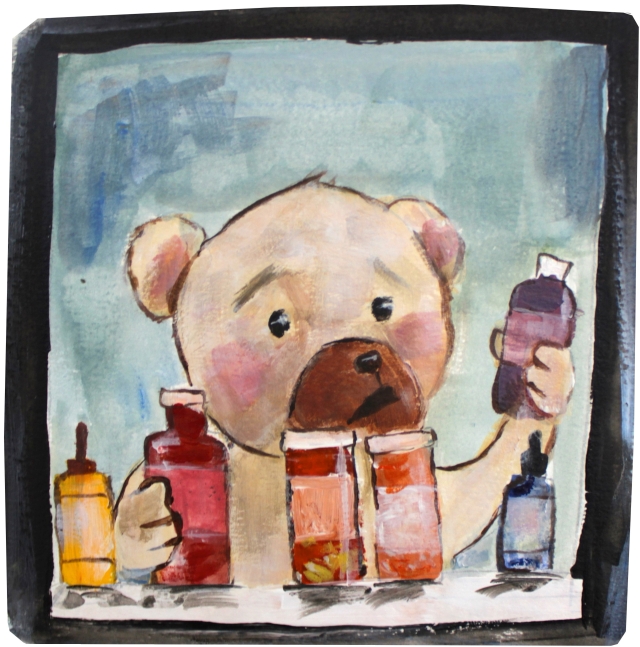 He rummaged through the many bottles – orange and white, blue and pink, red and yellow. He found the necessary purple bottle in the back (he knew the one well, yuck) and wrapped his paw around it before jumping back down to the floor…success!

Next up, orange juice.

The juice was in the fridge of course, but much like the icky, syrupy medicine, the fridge was protected from Flapjax and Libby shenanigans with what the grownups called a “child lock”. And if a child with 10 fingers and several more inches of height than Flapjax couldn’t open the door, he had no shot. But he did have a plan…

He slipped over to the drawer with all of the baking tools and rummaged through the measuring cups and cheese graters until he found a long, wooden spoon. He snatched it up and ran as lightly as he could to hide beneath a barstool. From there, he had an excellent view to watch for openings.

After just a few minutes, Mom padded over in her fluffy pink slippers, humming softly to herself as she opened the door and reached for the orange juice. Flapjax started to inch out, waiting until she had put the juice back in the fridge – on the bottom shelf, at bear-height! – and walked back to her breakfast and newspaper, humming loud enough to not notice the soft bang of the refrigerator door as it hit the wooden spoon.

Flapjax grinned and grabbed the juice, hurrying out of the kitchen.

Tissues. He searched around the living room and spotted the blue cardboard box with tissues peeking out of the top. It was on a table with the telephone and a big lamp covered in colorful glass patterns. But it was a bit high up on that table…

It was a good thing Flapjax was a champion furniture climber. Really. They had thrown a Furniture Olympics last summer, and he had been champion of the Volcano Games, where you couldn’t touch the ground because it was covered in hot lava, so you had to jump and climb from one piece of furniture to another until you made it through each room.

And he was ready to use those skills now.

He grasped a couch cushion and inched his way up until he could run across the back like a balance beam. When he got to the end, he leaped across to the box of tissues. Unfortunately, the phone, the tissue box, the glass lamp, and a plump Flapjax could not all fit on the tiny table at the same time. As Flapjax landed, he bumped the lamp. Before he could reach out to catch it, the lamp fell to the floor, crashing into hundreds of pretty reds and blues and greens and yellows on the floor.

Flapjax stared down at the sharp, glittery mess, frozen in panic. Boyyyy was he going to be in some serious trouble…

But then he heard Libby cough again, and knew he had to keep going.

The only thing between Flapjax and Libby now was a flight of stairs. Flapjax looked up at his Everest and gulped, preparing for the climb.

One thought on “Chapter 1, Post 2: Flapjax to the Rescue”