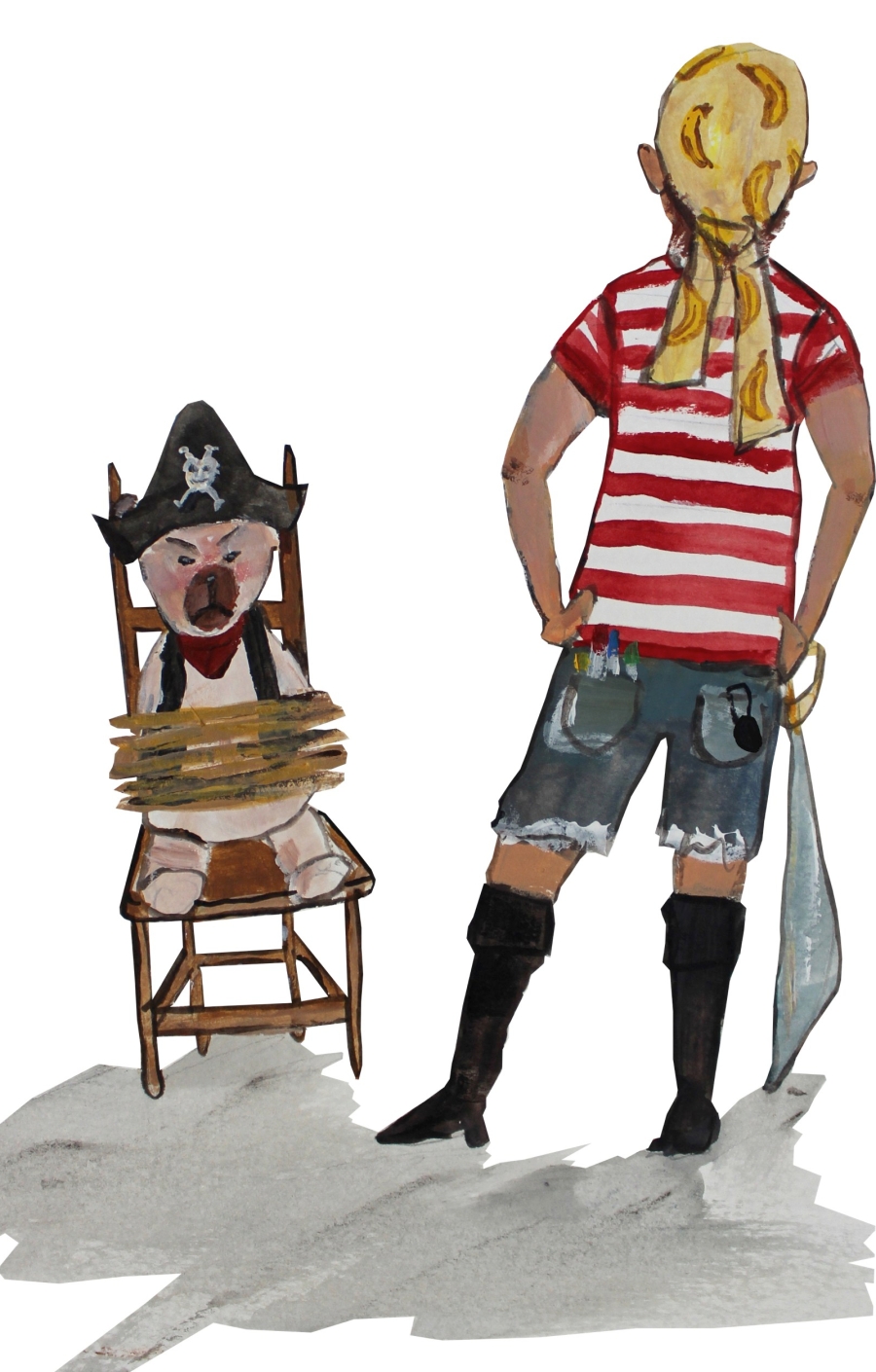 (Have you read Chapter 4, Post 1: Flapjax and the Fancy Pants yet? If not, we recommend starting there!)

Flapjax awoke with a start. His paws were tied behind him, and he could not see a single thing. He was a prisoner of Captain Tommy Bananas, the notorious pirate (and Libby’s despicable cousin).

He tried desperately to untie the knots around his paws. He bent and pulled in all directions, but his efforts were futile! He was never going to escape, not on his own.

He silently screamed for Libby, hoping she could sense his positioning – like when they were playing hide-and-seek and she always knew where he was. (Libby would tell you that was because Flapjax always forgot to hide his tail, but Flapjax was pretty sure she was telepathic.)

Suddenly, Flapjax heard heavy, booted steps approaching. A door on the other side of the dark room opened and the sneering face of Tommy Bananas appeared in front of Flapjax.

Flapjax gulped loudly. He had lost his pirate-y eyepatch in the water when his ship, the Fancy Pants, had capsized (an event maybe – okay, probably – of his doing, but that was beside the point right now). As he stared up at Tommy who sported his characteristic banana bandanna on his head and a long sword at his waist, Flapjax felt significantly less brave than he had at the start of this adventure. How could he fight another pirate without any pirate gear? He felt like a fraud. 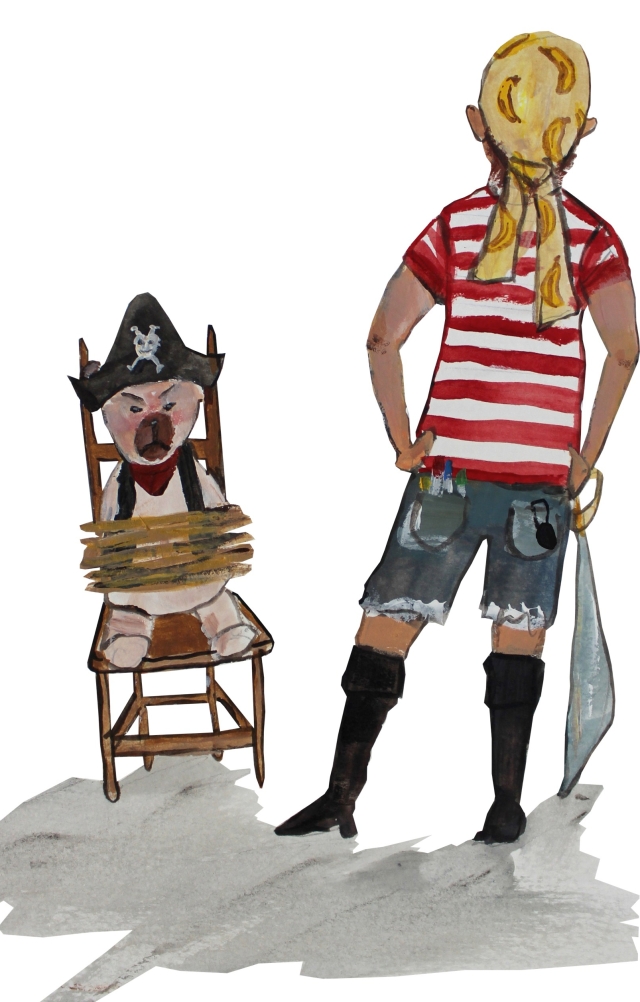 Tommy Bananas laughed maniacally at him.

“Pirate Flapjax…” Tommy Bananas said, circling Flapjax slowly, his hand on his sword as if daring Flapjax to make him use it.

Flapjax pictured the sword slashing across his tummy, pillowy stuffing pouring out until there was nothing left of him but a flat lump of fur, and he felt tears prickle in his eyes. He didn’t want to die! He had so many more adventures with Libby planned. Plus, he was pretty sure being sliced up would hurt.

“It has been a long, hard battle, but I have beaten you,” the evil pirate captain spat gleefully at Flapjax. “Captain Libby is stuck on an island in the middle of nowhere, and you are my prisoner.”

Flapjax stuck out his tongue in reply.

Tommy Bananas just looked at him with amusement. “Nice comeback. You are just as smart as I thought you would be.” The sarcasm dripped like water.

Flapjax growled. He WAS smart. And he would show Tommy Bananas just how smart he was. He just had to devise a plan…

“Flapjax,” Tommy continued simply. “You have two options. Option one, you can join my crew.”

Flapjax frowned and turned his back on Tommy Bananas.

Flapjax tried to remain calm, but he was panicking inside. Joining Libby’s nemesis, Tommy Bananas, was out of the question. He would never ever betray his best friend like that! But walking the plank meant sure death (plus, he really, REALLY did not want to get wet again…it takes a very long time for a soaked stuffed bear to dry off). 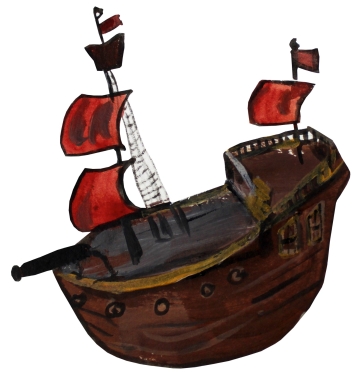 Tommy Bananas stared down at a cowering Flapjax. “You have five seconds to make a decision, Flapjax! Five…four…”

Flapjax became frantic…he didn’t know what to do!

“ONE,” Tommy Bananas finished with a snarl. “Well, Flapjax? Which is it?”

Flapjax searched around the dark, damp, smelly room for an escape, but the daunting figure of Tommy Bananas stood between Flapjax and the only exit. He tried to make a run of it, but Tommy was so much taller than him and way too fast, and before Flapjax could get to the door, he was being pulled back by his tail.

“You’re out of time, Flapjax! Decide your fate!” Tommy Bananas yelled, unsheathing his sword and pointing it at a shivering Flapjax.

Flapjax then did the only thing he could think of. He ran at Tommy Bananas…and jumped into his enemy’s uncomfortable arms.

Come back next week to find out if Flapjax gets rescued! 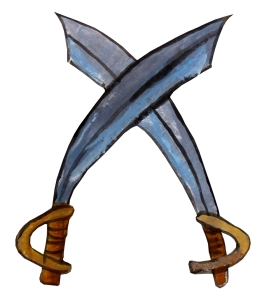