(Have you read Chapter 6, part 1: Downtheback yet? If not, we recommend starting this adventure there.)

Flapjax fixed his ivy hat and grabbed his bow and arrows from where they had landed after his dive from the railroad tracks, and he followed the voices of the neighbor boys to a fort in the middle of the island. 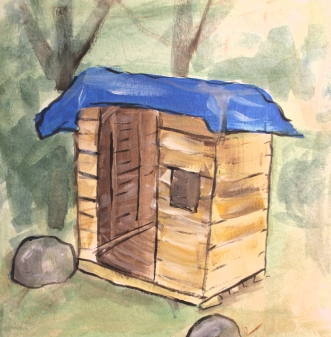 There was Libby, sitting on a cut-up log on the side of the fort. She was busily drawing away on her notepad. Flapjax smiled. It was just like Libby to be focused on her mission while captive.

The neighbor boys were busy gathering sticks along the edge of the water. Flapjax didn’t know what the sticks were for, but he didn’t want to stay to find out. He crawled over to the fort then tip-toed around, edging along the side of the little fort until he was right behind Libby. He pulled out one of his arrows and gently tapped Libby’s back with the end of the stick. She screeched and jumped, turning around in all directions to find her foe.

“Flapjax!! What are you doing here?” She looked at Flapjax’s muddy face and her eyes grew very large. “You are filthy! Mom is going to flip out!”

Flapjax put his paw to his lips and pointed toward where the neighbor boys were playing beside the water.

“Are you here to rescue me?” Libby asked with a crooked smile. “You’re so brave, Flapjax!”

Flapjax stood up a little taller, proud of his accomplishment.

“But we can’t escape…they have weapons! We’ll be shot!

Flapjax grabbed dirt from the ground around him and threw it at Libby, covering her with mud and bits of leaves. Good, now she was camouflaged too!

“FLAPJAX! What are you doing? Now I’m going to be in trouble, too!”

First Flapjax needed to get them off the island and away from the enemy boys, then he would worry about what his punishment would be. (He was sure it would involve a bath at the very least…)

They needed to distract the boys. Flapjax pulled out an arrow, and holding it up to the bow, he let it fly with a loud “FA-BEWM”. It landed on the other side of the small island in a pile of leaves. The boys glanced up from their digging and stared in the direction of where the arrow landed. He shot another arrow. “FA-BEWM!” It flew through the air and hit a tree on the other side of the fort.

The neighbor boys jumped up and ran towards the sound…leaving Flapjax and Libby alone on their side of the island. They quickly pulled the plank bridge over to the water’s edge and heaved it across. It settled with a thud on the far shore. Libby and Flapjax sprinted across the plank just in time to see the neighbor boys running back in their direction. Libby was safe on the other side. Flapjax was close behind.

Just as Flapjax was feeling pretty confident in his escape, the plank shifted beneath him. Before he knew what was happening, the plank flipped over, and he was falling head-first into the rushing water.

“Flapjax, nooooooo!” Libby screamed. She grabbed for a paw, but it was wet and covered in muddy slime. Flapjax slipped from her grasp and was swept in the current down the stream.

The neighbor boys stood across the water from Libby, watching as she lost her best friend in the rapids. But instead of laughing or shooting off more arrows, they sprang to action. They pulled a long pole from a pile of branches on the side of the hut and ran along the water until they were ahead of Flapjax as he struggled to stay afloat in the murky water. They positioned the pole across the stream.

“Grab the other side!” Ben, the older neighbor boy, shouted at Libby, and together they waited for Flapjax.

Flapjax was safe, but he was back on the other side with the enemy.

Were they the enemy though? They had just saved him. He wasn’t sure anymore…

“Well, you’re safe, Flapjax, but now we have no way of getting back to the other side.” Ben said with a hint of panic in his voice.

“Yes, you do!” Libby shouted from the other side of the stream. Dad was standing beside her with an angry face and a fresh plank poised for rescuing…

Once everyone was back on the safe side of the stream, Dad led them all out of Downtheback and back up to the house for snacks and some much-needed baths. Libby, Flapjax, and the neighbor boys were silent as Dad reviewed the rules of Downtheback with them.

Flapjax thought about his adventure as he was scrubbed down in the sink that night. He was lucky. He didn’t even know where the stream ended…what if he had been washed away into the ocean?

He pictured a shark chomping down on his fluff and he shivered. He was definitely more of an indoor bear… 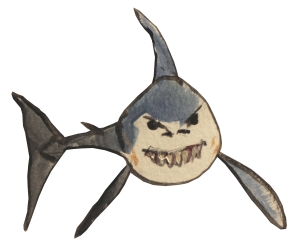