Life doesn’t get much better than summertime at the Jersey Shore. There is just something so glorious about baking on the beach, running around and getting sand in your fur, speeding in bumper cars, winning prizes for being the best at water guns, and eating all the ice cream a bear could want. As long as he stayed away from the crashing waves and the rolling tide of the ocean, Flapjax was in Heaven.

One hot, sunny day, as Libby and the grownups were splashing around in the waves, Flapjax was avoiding the water like it was his job. Baths were bad enough, but add slimy ocean creatures and sticky salt to that, and it was Flapjax’s nightmare. So instead of swimming, Flapjax passed the time building sandcastles and rummaging through the snacks Mom had packed for them.

After devouring a bag of homemade cookies, Flapjax yawned. He was desperately tired. Castle-building was tough work! And the sand was so soft and pillowy. Flapjax sprawled himself out on a beach towel under a big, colorful umbrella, laid his head down, and immediately started snoring.

Flapjax started to panic. He turned and kicked and punched as hard as he could, but it was useless…he couldn’t escape the sand. He saw the human kids a few towels over, watching him with mischievous smiles on their faces. Flapjax growled and tried to telepathically tell Libby he was stuck.

Flapjax sighed. He’d just have to stay stuck until Libby was done playing…not quite his idea of a fun beach day.

All of a sudden, a shadow crept up over Flapjax. Another human was standing over him. At first, Flapjax was scared. The shadow was really tall! But luckily the human was normal-size, and she was wearing a bright red bathing suit and sunglasses, and she had a shiny whistle around her neck. A lifeguard! He was saved! She looked down at Flapjax curiously as he stared back at her with a sheepish grin on his fluffy face.

“Hello, there,” the lifeguard said with a soft, pleasant voice. “What have you gotten yourself into?” Flapjax tried to shrug, but that was useless. Instead, he turned his head—the only thing moveable at the moment—toward the snickering humans who were still staring at him and stuck out his tongue.

“Ahhh,” the lifeguard said knowingly. “Well, how about we get you out of there, and in exchange, you can help me with the most important job on this beach?” She winked at Flapjax, and he grinned excitedly. He would have jumped up and down excitedly, but he was still stuck in the sand, so his head just bobbed and bobbed as the lifeguard/his new friend started digging him out of the sandy mountain. 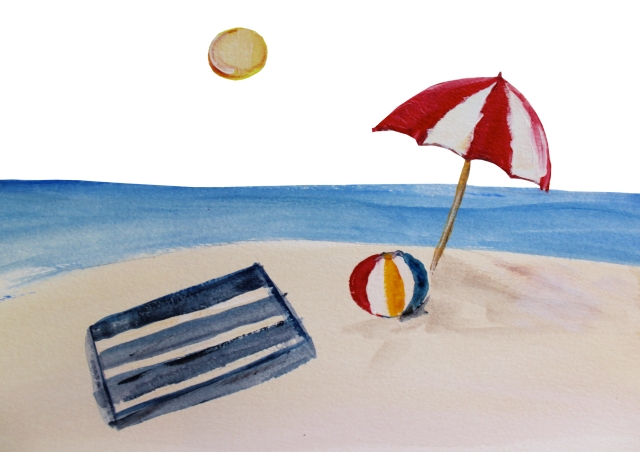 Flapjax was having the GREATEST DAY EVER.

Not only was he at his favorite place (the beach), but he had made friends with the queen of the beach. He glanced over at his new human friend as she regally reigned from her position on the lifeguard stand, and he smiled. This was much better than being stuck in a pile of sand!

The lifeguard blew her whistle with authority and motioned for swimmers to come closer. They kept trying to go out past the jetty, which was not allowed, not in her kingdom. Flapjax stood beside her on the lifeguard stand and helped her direct them. He was pretty good at assistant ruler, and he couldn’t wait for Libby to see him in his new job.

All of a sudden, the lifeguard queen jumped down from her throne and started sprinting across the sand, calling for her fellow lifeguards to join her. Someone was in trouble in the water. 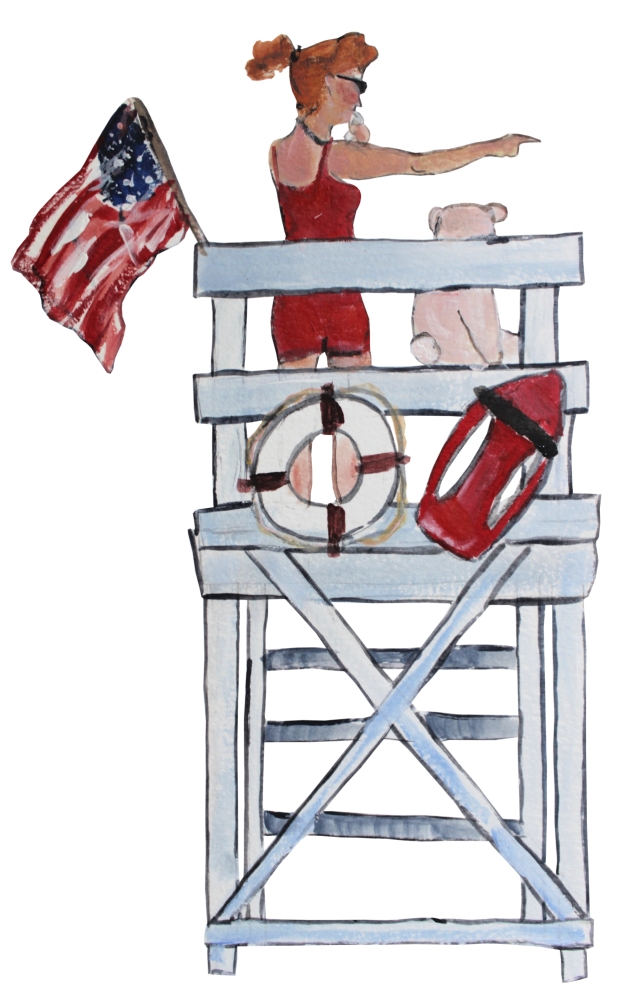 Flapjax started to panic. It couldn’t be Libby. Libby was an excellent swimmer, and she always listened to directions. She would never try to swim out that far. But just the same, he was worried. He always worried when he couldn’t be there to protect her.

Flapjax jumped down from the stand and followed the stream of lifeguards towards the water, searching all around for Libby. But he couldn’t find her.

The lifeguards rushed to help the stranded swimmer. Flapjax knew what he had to do, and just as he was about to dive into the waves, he heard a voice call his name.

Libby! She was okay!

“Flapjax, what are you doing out here? Get out of the water before you get pulled out into the ocean!” she screeched, grabbing Flapjax’s paw tightly and pulling him back toward the dry sand. But she didn’t have to worry…Flapjax had no intention of diving in now that he knew Libby was okay. She was his to protect, but his new friend, the lifeguard queen, could protect everyone else.

Sure enough, there she was, walking out of the water with the swimmer who had ignored her warnings and had floated too far out, way past the jetty. The swimmer looked waterlogged and tired, but he was okay.

The lifeguard queen saw Flapjax with Libby and smiled as she passed by. Flapjax waved his paw in an excited cheer. The lifeguard was amazing. He hoped he could be amazing like that one day.

After the ocean scare, Flapjax and Libby decided they were done with the beach for the day. So, after a quick trip to the hot dog stand for lunch, Flapjax and family made their way to the arcade.

Have you ever been to a beach arcade? They are the GREATEST. Hundreds of games and prizes, right on the boardwalk! Giant stuffed bears hung from the rafters…the ultimate goal for a girl and her furry best friend. All they needed were a few (thousand) tickets, and they could win one of those big bears.

They had $5 of Libby’s hard-earned chores money (Flapjax totally helped earn that) and one whole hour before they would be hauled off home for the day. Could they do it?

Libby liked the Jurassic Park game the most, so she beelined to the prime seat in the Libby-sized plastic Jeep. Flapjax stayed away from the racing games — they made him so dizzy! — and eyed the machine that would be his way to glory: the skee-ball machine.

There was a row of skee-ball machines. Flapjax took his place in the lineup of human children, eyeing those on either side of him. They looked down at him and laughed…how could this little bear play skee-ball?

Flapjax inserted his quarter into the machine and waited as it groaned and spat out a line of mini bowling balls his way. Then, with a deep, calming breath, Flapjax lifted a ball out of its place and hurled it down the runway towards the bullseye.

Thirty points. Good, but not great. He would have to do a lot better than that if he wanted to win Libby her dream prize!

He picked up another ball and rolled it down, eyeing the 100-point goals in each corner. He held his breath until his ball hit the back wall with a thud. Ten points. Blast.

Flapjax heard snickering coming from behind him. He turned to find a crowd of humans huddled around him, watching him play skee-ball. They were all laughing at him!

He picked up another ball and aimed carefully before rolling it down once again. He held his breath as it popped up and bounced around before settling into the hole. Forty points! He was getting better.

Once more down the runway, and a 50-point score! Tickets printed from the side of the machine as Flapjax added to his tally.

He had only a few more chances left. Flapjax concentrated as hard as he could. He closed his eyes and pictured the ball going down the ramp and leaping up into the 100-point hole.

He could do this. He knew he could!

Flapjax took a deep breath and threw the ball down the runway once more. He closed his eyes and waited. Suddenly the crowd around him burst into cheers for the tiny bear who had just won the ultimate skee-ball goal: the 100-point hole.

And then he did it again. 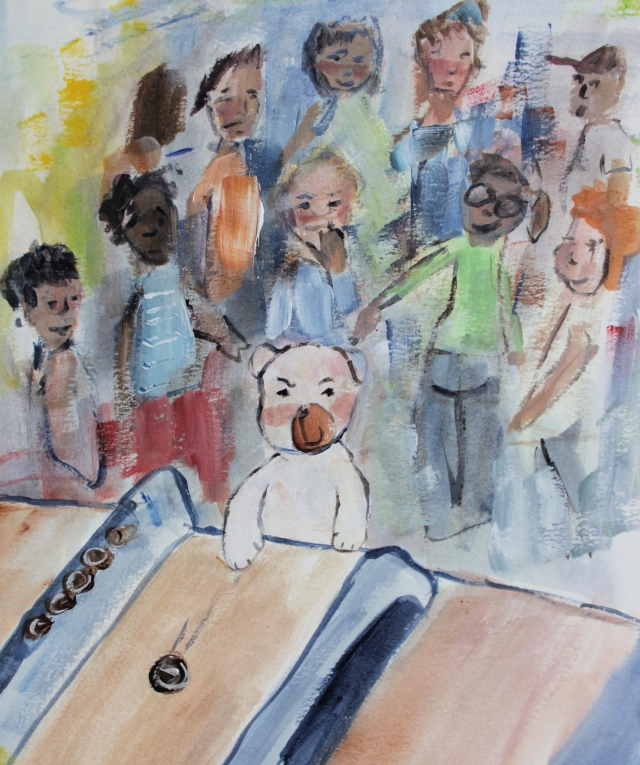 Tickets streamed out of the machine as the crowd roared with praise for Flapjax. He grinned, enjoying the praise but really only wanting to show Libby his ticket treasure. He piled the tickets into his arms and ran to the Jurassic Jeep, jumping into the passenger’s seat just in time to avoid the T-Rex as Libby steered away with a calm poise…until she saw all the tickets.

When she saw the tickets, she leapt up and squealed with glee. He’d done it! Flapjax had really done it! They must have enough now for the grand arcade prize…

Together, they ran to the counter to tally up their winnings, peering through the glass windows at all sorts of stickers and candies and erasers while they waited.

“240 tickets,” the human boy behind the counter announced to a heartbroken Libby and Flapjax. Only 240? How could that be? Flapjax had done the impossible!

“Okay. So what can we get with 240 tickets?” Libby asked, pouting just a bit…

Well, it wasn’t a giant stuffed bear, but Flapjax couldn’t complain. He looked down at his paw, clasped tightly in Libby’s hand in the back seat of their parents’ car, with twin star tattoos printed on both of them (okay, they were just the temporary kind, but a bear could pretend).

He smiled contentedly before falling fast asleep to dream of skee-ball glory.