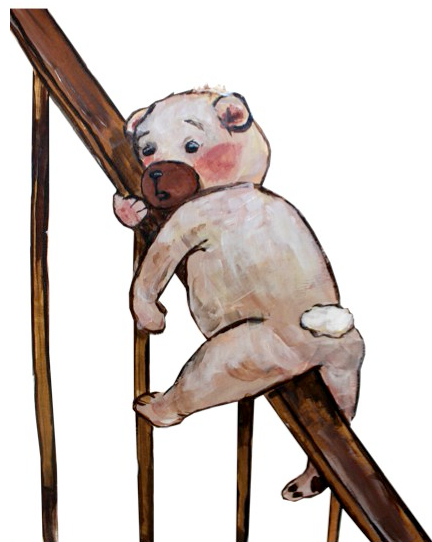 It was way past bedtime, and Flapjax — the lovable (if mischievous) stuffed bear that he was — knew he should have been asleep. He had been curled up beside his best human friend, Libby, all snuggly and warm, and he had just started to doze off when his nose twitched.

Flapjax inhaled deeply. The smell of something warm and buttery filled the room. He sat straight up in bed, wide awake. The heavenly smell was coming from downstairs.

He had to investigate!

Flapjax carefully crawled off the bed and padded his way to the stairs, trying not to wake Libby up as he snuck his way to the snack. He made his way slowly down the stairs, cautiously avoiding the creaky spots on the steps. When he got to the landing halfway down, he belly-crawled to the corner of the big step where he could peek around the wall and get a better view of the field. And that’s when he spotted it.

Popcorn. A big, red bowl was overflowing with the puffy, buttery snack.

Flapjax’s tummy growled again. He rubbed his paws over his stomach, trying to tell it to quiet down. He had to focus.

How could he get to the popcorn?

Mom and Dad were perched on the couch on either side of his target.

Flapjax looked down at the steps and knew it could take a little bear a very long time to get all the way down and across the living room. Then he looked up and saw the railing – a perfectly smooth slide angled directly in the direction of the couch…

He positioned himself belly-down on the railing, counted to three in his head, and let go.

With a whoooooosh, Flapjax was sliding down the railing at wizard-speed and immediately regretting his move. He closed his eyes and tried not to scream as he sailed tail-first through the air.

Just a few short, heart-pumping seconds later, Flapjax smacked into the window on the opposite side of the room, leaving a tail print on the clear glass. He fell to the ground, dazed, then wobbled to his feet and shook himself off. He rubbed his bottom where it was red from the window’s rude interference.

Back on track, Flapjax hid behind a tall, leafy plant, hoping his parents had missed his rather unfortunate trip across the room. Luckily, they were still sitting on the couch, making their way through Flapjax’s snack. The TV was on, and there was music coming from the speakers set up around the room. Flapjax tore his eyes away from the bowl of popcorn to see what the grownups were so focused on, and his mouth gaped with amazement.

On the TV, a girl in a frilly, blue, sparkly costume glided around a white floor while music played and people cheered around her. The music was thrilling, and Flapjax felt his tail begin to move with the beat. The gliding girl spun and jumped, defying gravity with each move. Flapjax stared, entranced, until the music faded and a new tune came on, a tune he had heard before. He crept out of his hiding place to get a better view of the screen.

“Flapjax? What in the world are you doing down here? It’s way past bedtime!”

Mom was hovering above him, eyebrows raised.

Flapjax sighed. It had been a long night, and he was pretty pooped. Bed wouldn’t be such a bad idea.

Mom picked him up and walked him toward the stairs.

“Were you watching the Olympics with us?” she asked, patting Flapjax on head.

The Olympics! Yes! He remembered that last tune from another time, long ago in the summer, when he and Libby had watched the events daily, practicing gymnastics routines on the furniture whenever they could.

“Don’t worry, you can watch ice skating with us tomorrow.”

Ice skating! Flapjax could be an ice skater. He felt his eyes start to close as he pictured himself sailing across the ice, spinning and flipping through the air with ease.

Flapjax was almost asleep on Mom’s shoulder, ready to be tucked back into bed, when he heard a loud crunch behind them. His eyes popped open, and he renewed his focus on the popcorn, eyeing Dad with a jealous glare when he saw the empty bowl at his side. A little growl of annoyance escaped his mouth.

But Mom knew him well, ”Don’t worry,” she whispered. “I’ll make more tomorrow — just for you and Libby.”

Flapjax sighed and let visions of skating glory and golden medals fill his dreams. He couldn’t wait until tomorrow…